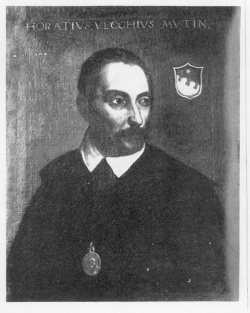 "Vecchi" redirects here. You may be looking for Orfeo Vecchi. See also the disambiguation page for Vecchi.

Biography:
Orazio Vecchi was an Italian Renaissance composer born in December of 1550 in the city of Modena. One of his first madrigals was "Volgi cor lasso" (from his first book of four-voiced madrigals) composed early in 1566. He started his early career, aged sixteen, as the chapel organist in his local church in Modena. He later determined to enter a priestly order, and in 1586 attained a canonship in the cathedral at Correggio. In 1591 he was appointed to the arch-deaconry and participated in the editorship of the Roman Graduale, published in Venice by Gardano. He died on February 19, 1605 and was buried in the family vault in the Chiesa del Carmine at Modena.

Secular works in other languages