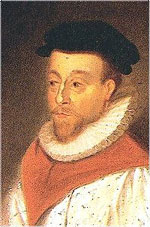 Orlando Gibbons was Organist of King's-College Chapel, Cambridge; was appointed Organist of the Royal Chapels to King James the First, in 1604; and commenced Batchelor in Music at the above-mentioned University, in 1606. He was very skilful in his Profession, and approv'd himself not inferior to any of his Predecessors, in Genius or Knowledge.

He died at Canterbury, and was there buried.

On his Monument is the following Inscription:

To Orlando Gibbons of Cambridge, Born among the Muses and Musick; Organist of the Royal Chapel, emulating, by the Touch of his Fingers, the Harmony of the Spheres; Composer of many Hymns, which sound his Praise no less than that of his Maker; A man of integrity, whose manner of Life, and sweetness of Temper, vy'd with that of his Art; being sent for to Dover to attend the Nuptials of King Charles and Mary, he died of the Small-Pox, and was convey'd to the heavenly Choir on Whit-Sunday, Anno 1625. Elizabeth his wife, who bare him seven Children, little able to survive such a loss, to her most deserving Husband hath with Tears erected this Monument.

His Brother, Edward Gibbons, Organist of the Cathedral Church at Bristol, greatly distinguish'd himself by his Loyalty, in assisting King Charles the First with One Thousand Pounds in the Time of the Civil War; for which Service he was afterwards very severely treated by the victorious Party, who deprived him of a considerable Temporal Estate. He was more than Fourscore Years old when this Misfortune happen'd to him. Christopher Gibbons, the Son of Orlando, was Organist of the Royal Chapels, and one of the Band of Musicians to King Charles the Second. He also obtain'd the Degree of Doctor in Music at Oxford, 1664, by vertue of his Majesty's Letters. He was likewise Organist, and Master of the Choristers to the Collegiate Church of St. Peter, Westminster.

Hymn tunes (17 contributions to G. Wither's The Hymnes and Songs of the Church (London, 1623)