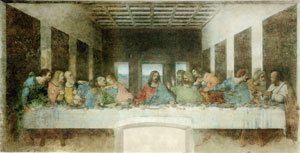 The last two stanzas of the hymn Sacris solemniis, composed by St. Thomas Aquinas for Matins of Corpus Christi and of the Votive Office of the Most Blessed Sacrament. The rhythmic stanza imitates the classical measures found in Horace and in several hymns of the Roman Breviary; but for whatever excellence the hymn lacks in respect of classical prosody it compensates in the interesting and intricate rhymic scheme.

Several references are made to the hymn by Hincmar of Reims, one of the most interesting being his objection to the theology of the last stanza (Te trina Deitas). Hincmar admits that he knew not the author of the hymn which "some people end with the chant or rather blasphemy [a quibusdam cantatur vel potius blasphematur] Te trina deitas." The phrase objected to was nevertheless sung in the doxology of the hymn down to the revision of pope Urban VIII.

Delaporte (Les Hymnes du bréviaire romain in the Rassegna Gregoriana, Nov.-Dec., 1907, col. 501) remarks that, when the edition of 1602 of the Roman Breviary was in preparation, Cardinal Gesualdo in 1588 wrote to various nuncios to get suggestions for emendations. The nuncio at Paris consulted alcuni principali della Sorbona, with some curious results, one of which was the criticism demanding a change in the doxology of the Sacris solemniis from "Te trina Deitas" to "Te summa Deitas", for the reason that "it is impious to call the Deity, or the essence of God, threefold".