Aliases: William Byrde; William Bird; William Birde; William Burde; William Burd – If his surviving signatures are a representative sample, the composer's preferred spelling of his own name was "Byrde", although on his own publications it also appears as Bird and Byrd. His contemporaries knew him indiscriminately as Byrd(e), Bird(e) and even Burd(e). 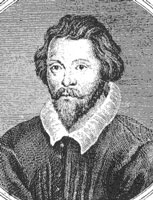 Biography:
Byrd's will, dated November 1622, declares that he is ‘in the 80th yeare of myne age’, but since a deposition of October 1598 gives his age as ‘58 yeares or ther abouts’ it seems likely the will had been drafted some time before being dated.

William Byrd was one of the most celebrated English composers in the Renaissance. His entire life was marked by contradictions, and as a true Renaissance man he cannot be easily categorised. He lived until well into the seventeenth century without writing music in the new Baroque fashion, but his superbly constructed keyboard works marked the beginning of the Baroque organ and harpsichord style. Byrd's life is interesting because of his Roman Catholic sympathies combined with his work in the court of the Anglican Queen Elizabeth I. He composed much music, if intermittently, for the Roman Catholic liturgy, particularly in his later years; the two volumes of Gradualia form a prime example. Possibly as a result of this he did not receive widespread recognition in his lifetime, but was very well respected among the Roman Catholic gentry. In the anti-Catholic frenzy following the 1605 Gunpowder Plot, the first volume of the Gradualia, printed by Thomas East in 1605, was banned in England under penalty of imprisonment as indeed was all of his Catholic music; however his Anglican music— such as the Short Service, and the Responses— has been sung in English cathedrals uninterrupted for the past four centuries.

William Bird, was admitted a Gentleman of the Chapel Royal in 1569. He, in conjunction with Thomas Tallis, published in 1575 a collection of their own compositions in Latin, entitled, Sacred Songs: and in the Years 1589, 1591, and 1605, he printed three other collections of his own Productions in the same Language, all of which had the same Title with the first conjoint Publication.

His works were, in his own time, in great Repute, both at Home and Abroad, and are still held in general Estimation: His Canon of Non nobis Domine, will, in particular, remain a perpetual Monument to his Memory.--- He died in 1623.

Note. This page is only partially automated. For an automated version, see /Automated.

There is no single official Byrd website, but a variety of useful resources can be found scattered widely across the Web. Many of these sites still repeat the (almost certainly) incorrect birthdate of 1543.