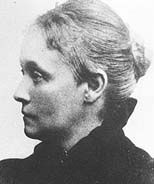 Agathe Backer-Grøndahl was both a pianist and a composer. Her compositions consist largely of piano pieces and songs, of which the latter are generally the more highly regarded. Indeed, of Grieg's Norwegian contemporaries, she is the composer whose songs have best withstood the test of time.  She was born in Holmestrand (near Oslo). Her musical talent manifested itself when she was a child, and she began writing small pieces while still quite young. When she was ten years old her family moved to Oslo, where her first teachers were Otto Winter-Hjelm and Halfdan Kjerulf. She later received training in music theory from Ludvig Mathias Lindeman. On the advice of Kjerulf she was sent to Berlin in 1865 to study at Theodor Kullak's music academy. After her performing debut in Oslo in 1868 she again went abroad for further training, studying with Hans von Bülow in Florence, Franz Liszt in Weimar, and others. She returned to Oslo in 1871, but was frequently away on concert tours. In 1875, she married Olaus Andreas Grøndahl. Backer-Grøndahl was an important performer in Norway for many years. She gave concerts throughout the country and was a frequent participant in chamber-music evenings in her native city. She also made numerous concert tours on the other Scandinavian countries as well as to Germany and England. Undoubtedly one of the most talented pianists Norway has produced, she received constant critical acclaim for her thoroughly musical transparent style as a soloist and her ability to blend into the ensemble when she participated in chamber-music performances.   Excepting two orchestral works written while she was a student in Berlin, and a few pieces for mixed chorus, her opus list contains seventy numbers. She wrote approximately 190 songs and 120 pieces for piano, as well as arrangements of more than fifty folk tunes - some for voice and piano and some for piano alone.