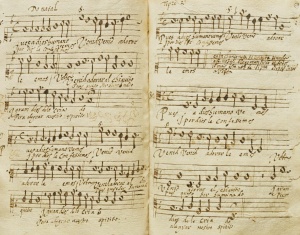 A page from the Cancioneiro

This little manuscript with just 18 songs was found in the archives of the National Archaeology Museum, in Belém (Lisbon), by the end of the 1960s. Currently with 77 folios sized 191 x 130 mm, the songs proper are found between folios 58v and 74.

Inside the songbook, an inscription reads Porto, dia de S. Miguel, 603. (Porto, St. Michael's Day, 1603). In spite of that, the music therein is considerably older, being dated as belonging to the period between 1560-1580. This songbook contains the only Portuguese manuscript madrigals known to date, besides vilancetes, cantigas and two rare examples of sacred villancicos, one for Christmas (Pues a Dios humano vemos) and the other for the feast of Corpus Christi (O manjar bivo, dulçe i provechoso).

A few songs are also found in other manuscript sources, as for instance the Cancioneiro de Elvas, and in printed Spanish editions of the 16th century, but the majority of the works are found exclusively in this manuscript.

Concordance with other manuscripts: