Difference between revisions of "Magnificat" 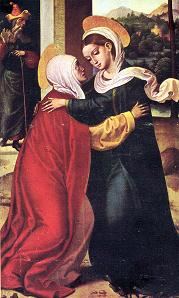 Originating from the Latin word for "magnify" (although originating in the Greek New Testament), the Magnificat is the name given to the words of Mary in Luke's Gospel, beginning "My soul doth magnify the Lord and my spirit rejoices in God my Savior." According to the gospel, Mary, while pregnant with Jesus, visited her cousin Elisabeth, who was at the time pregnant with John the Baptist. In response to Elisabeth's salutation Ave Maria, she spoke the words of the Magnificat.

The Magnificat is the canticle appointed to be sung at Vespers in the Roman Rite; it is the first canticle used at Evening Prayer (called "Evensong" when sung) in Anglican tradition, the second canticle being the Nunc dimittis. The latter canticle is appointed as the proper canticle of Compline in the Roman rite. Composers writing for the Anglican tradition typically treated the Magnficat and Nunc dimittis as a related pair; those writing for use in the Roman Rite typically treated the two independently.

For more detailed discussion, the reader is invited to refer to these wikipedia pages:

See Category:Evening Canticles for a list of all evening canticles on CPDL.

Texts used in settings and translations

Most musical settings in English use the Book of Common Prayer text, including the minor doxology, Gloria Patri. The King James Version is provided for comparison.