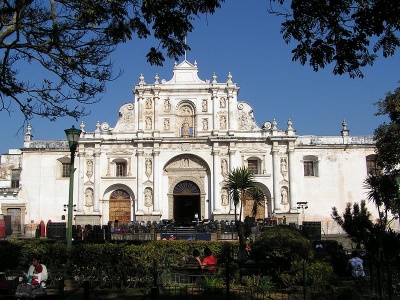 Note: a full list of cpdl scores transcribed from the archive may be found here.

The works date from the 16th to the 18th centuries. A large number of works from the archive have been microfilmed. The microfilm versions, or some of them, have in turn been digitised and are on line at the Música Colonial Management Site, hosted by Miami University Libraries. Musicologist the late Robert Stevenson has carried out considerable research work on the archive. He has transcribed a large number of works included in it. In so doing he appears to have had access to the originals and to many works not included in the Música Colonial Management Site.

Composers represented in the archive

Most of the composers represented in the archive are of Spanish origin. A small number originate from other European countries and from what are now independent Latin American states. In some cases the identity or nationality of the composer cannot be determined. The archive includes works for which there may be no other source. These include Morales' "Missa sobre las voces" and Ceballos' "Missa octavi toni". 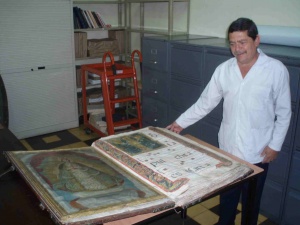 The Música Colonial project —at Miami University in Oxford, Ohio— is an initiative to preserve, digitize, and provide online access to mostly handwritten and some printed Colonial times cathedral music scores. The scores have mostly Spanish lyrics with some works in Latin. The collection is in microfilm format. It is archived at the Mesoamerican Center for Regional Research (CIRMA) located in Antigua, Guatemala. 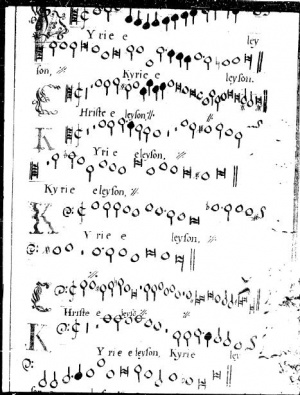 Image showing poor reproduction of many items in the Guatemala archive

The collection was borrowed from CIRMA and brought to the Miami University Libraries in Spring 2002 by professor Mario Ortiz, who was teaching at Miami University at the time. The collection consists of 811 cathedral music works (more than 10,000 pages) by different composers from the colonial times. One of the composers is the famous 17th Century Mexican nun and feminist Sor Juan Inés de la Cruz (see her villancico in the list below). 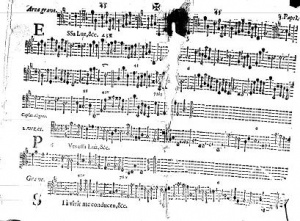 In 2003, a graduate assistant, hired by the library, performed and completed the scanning of the collection from its original microfilm format into TIFF format. In 2004, John Millard and Ting Gan scanned and reprocessed TIFF master files and created encoded copies using DjVu —an open source format that allows high-quality of scanned documents to be stored and made available on the web. Between 2006-2008, Thomas Garcia, professor in the Miami University Department of Music, coordinated a group of students and transcribed selected items. Various fields and methodologies of research can be done on this collection because of its multi-faceted and culturally rich content. The current transcription work available on this site is an excellent example of the type of online collaboration needed to complete the transcription process. The digitized files are available at the Música Colonial Management Site.

If you are interested in collaborating with us, please contact Elias Tzoc. The ultimate project goals include: provide public access to the collection’s original handwritten music score images, enable online collaboration for the transcription process, and create a more readable and aesthetically presentable version of the files with PDF and MIDI formats. 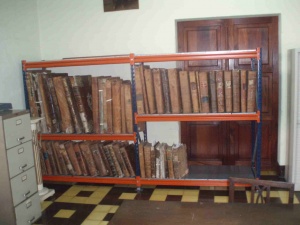 This on line material consisting of some 10,000 pages, is of uneven quality. In some cases the original itself is in poor condition or difficult to read because of fading. In other cases transfer to microfilm has not always been successful and subsequent digitisation of the microfilm has led to further degrading. Much of the material is therefore illegible or legible only with extreme difficulty. Some of the works are incomplete, it seems because pages are missing or have been destroyed or damaged.

Modern scanned copies of some of the original material, such as it is can, however, be obtained from the Cathedral Archive.

There are musical archives in most Latin American states. See the following general review. The Metropolitain Cathedral of Mexico have put number of musical manuscripts online here. There is less material than that from Guatemala but the quality of the scans is much better.

Selection of material for transcription has been influenced not only by musical interest but also by whether the online copies are legible or not. So, for instance, the villancicos of José de Torres are mostly legible, whereas the works of other composers may not be.