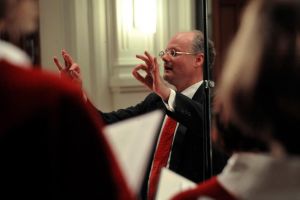 Country of origin: originally United Kingdom, now based in Germany

Director of the Embassy Singers, Berlin, and of the choir of St. George's Church, Berlin

Andrew studied German and Russian and has worked as a simultaneous interpreter for the German Government since 1988. The scores uploaded to CPDL mainly fall into the following categories:
→ scores produced for the use of his choirs;
→ a lockdown project to make all the public-domain hymns in the hymnal used in his church available online; these, including some which cannot be posted on CPDL, can also be found here,
→ a number of descants written for his choirs (his favourites are The day thou gavest and While shepherds watched),
→ and his series of bar-less Renaissance scores designed to liberate the rhythmic counterpoint. An article explaining the reasoning behind the bar-less scores can be found here.